Which lift is best suited for your building?

When installing a new Platform or passenger type lift there is so much to take into consideration, shapes, colours, half or full height mirrors, controls but we never look at what would be best suited to the building and be fit for purpose. 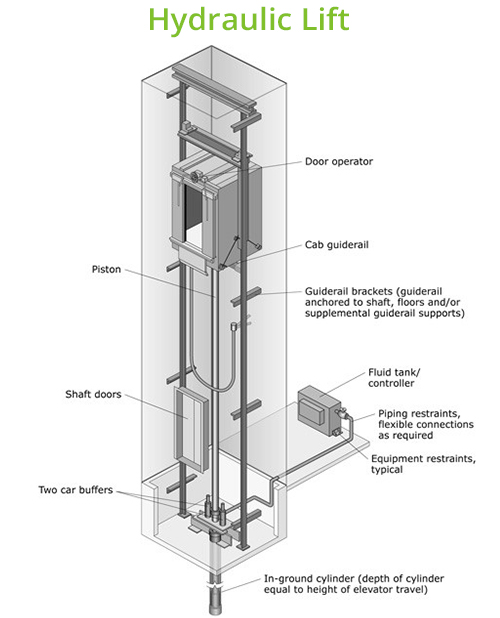 So how they work

Hydraulic lifts have been the most common type of lifting mechanism used in buildings throughout the second half of the 20th century. They work on the principle of an electrically powered pump that pushes pressurized hydraulic fluid – typically oil — to a jack lifting system. A piston within a cylinder at the base of the elevator pushes the car up and down.

Traction Lifts is essentially a box on steel ropes that are looped around sheaves connected to an electric motor. The sheaves have a counterweight attached at their end to balance the load of the elevator car. Traction on the ropes raises and lowers the elevator.

The same result is provided by both versions of elevators. The choice between the two depends on cost, maintenance and the types of building within which the elevator is to be installed.

Hydraulic Lifts are usually cheaper to install than the traction variety. They also occupy less space in a building, as the lift shaft requires about 10 per cent less area. These lifts are also more effective when high loads need to be moved, as the hydraulics provide a greater lifting force than traction ropes.

One of the main disadvantages of a hydraulic elevator is its slow speed. It usually cannot travel at speeds higher than 150 feet per minute (on larger travels). The performance of the oil as a hydraulic fluid varies with temperature, so an efficient machine-room control system is necessary. This type of elevator is a high-heat producing system. The oil may also leak into the ground at the base of the elevator and cause pollution in ground water. 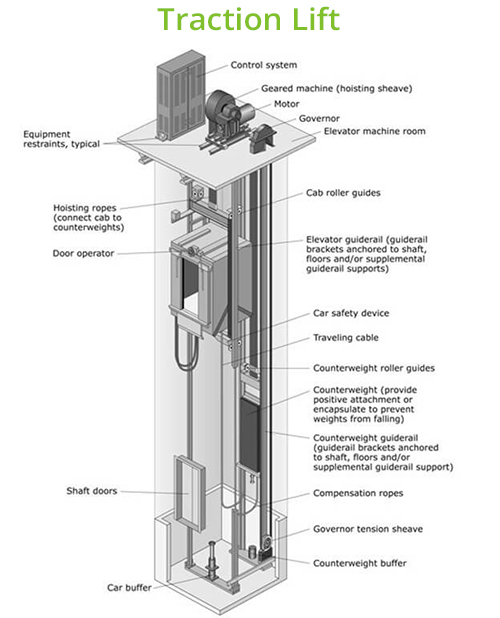 The main advantage of a traction lift is its higher speed compared with the hydraulic variety. This means the traction system can be used in tall, modern, 21st-century buildings. The ride in a traction elevator is also smoother. The traction system is also more energy-efficient as the counterweight balances the car load, whereas the hydraulic system needs to push the car against gravity.

The principle disadvantage of the traction lift is its cost. Installation can be 15 to 25 per cent more expensive that a hydraulic system. Traction lifts may also be difficult to maintain, as the machine’s controls are located in the shaft headroom. This area could be difficult to access. However, if a magnetic synchronous motor replaces the machine room, this will provide a superior control mechanism. It also makes the lift shaft process visible, making it easier to maintain and safer to operate. This will provide a good, albeit expensive, long-term lifting option.

In terms of energy usage, traction lifts are generally more energy efficient. This is due to the differences the way the two types of lifts work. With hydraulic lifts the pump works against gravity to push the lift car and contents in the upwards direction but this energy is lost when the lift car descends on its own weight. Whereas with traction lifts, these are counter balanced and do not use as much energy due to the counterbalancing effect.

If you would like any additional information or a site survey to see which option would best suit the building then please contact us.

Get in touch to talk through your access requirements

Where shall we send the brochure to?